IÉSEG > News > Pedagogy & Research > Climate change: Interview with Professor Hayley WALKER ahead of the COP26 Summit in Glasgow
Back

Climate change: Interview with Professor Hayley WALKER ahead of the COP26 Summit in Glasgow

With the UK posed to host the most important climate summit since the adoption of the Paris Agreement, the 26th UN Climate Change Conference of the Parties (COP26), we spoke to Hayley WALKER, professor of international negotiation about the challenges for the UK Presidency and the importance of establishing trust between the different parties. She talks to us about the upcoming conference in Glasgow and the findings of her research on the ways COP Presidencies can build, use and lose trust.

What is due to be decided at the COP 26 and why is it so important?

At COP21 in Paris, countries reached an agreement on a process to avert catastrophic global warming, but the commitments they made in terms of reducing greenhouse gas emissions at that time were far from sufficient. They therefore built into the agreement what is known as the ‘ratchet mechanism’ whereby governments need to come back every five years with more ambitious targets in what is known as a Nationally Determined Commitment (NDC).

The COP26 in Glasgow, that has been delayed a year due to the pandemic, marks the first round of these more ambitious NDCs to reduce the gap between the current reality and what is needed to move towards the 1.5° target countries set themselves in the Paris Agreement.

The eyes of the world are on the Glasgow conference to see whether leaders will commit to the rapid cuts in emissions that are necessary to “keep 1.5° alive”. It is highly unlikely that this round of NDCs will be sufficient to achieve the 1.5° target, so the key question is now whether collective action at the COP will be ambitious enough to keep this target within reach in the coming years.

What prompted you to carry out your research into multilateral climate negotiations involving nearly 200 countries?

I remember the moment at COP21 in Paris when Laurent Fabius brought down his gavel and announced the agreement had been adopted. I found this very emotional, but like many others I also wondered why it had taken governments over 20 years of negotiations to get there. At the same time, I was taking a course on global environmental politics as part of my Master’s degree in which we were given a simulation exercise of the COP21 negotiations. Every student was assigned to represent a country and I was asked to take on the role of President. While watching the Paris negotiations unfold, I could experience for myself how difficult it was to bring so many countries together to reach an agreement. As I began researching, I realized just how complex and challenging it is. Getting nearly 200 countries with vastly diverging positions, interests and ideologies to reach a consensus is like herding cats. There is no silver bullet, you need a combination of many different factors: geopolitical, societal,  economic, and you also need an effective COP Presidency with the diplomatic skills to mediate between all these governments and the logistical capacity to host a massive conference. There is not a lot that researchers can do about US-China relations or the global economic climate, but we can apply insights from organizational behavior and management to better understand how organizers of international negotiations can most effectively guide the process and the people working in it. I hope my research will contribute to helping Presidencies in this key role over the next years.

What are the key challenges and things the UK Presidency should bear in mind? 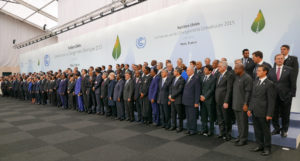 I believe there are two pitfalls for the Presidency to avoid. Firstly, to avoid ‘pushing’. Although counterintuitive given the urgency of the climate crisis, the UK Presidency must resist the temptation to push negotiators in any particular direction. It is essential that the Presidency is perceived to be acting impartially.

Second, Presidencies should look to operate a “no surprises” policy to avoid angering delegates.  This was the case with the French Presidency: although they met behind closed doors with key players to broker compromises during the final days of the Paris summit, they did so with the knowledge and consent of all present. Nobody likes to feel “out of the loop”: this also applies to climate negotiators.

When it comes to trust, the UK Presidency face tremendous challenges, notably a result of unfavorable geopolitics, the unequal covid recovery, and the logistical difficulties of managing a fair and inclusive COP during a global pandemic. Certain political decisions that have been made recently in the UK have also increased tensions coming into the conference.

What will represent a successful summit?

COP26 will not solve the climate crisis, it is part of a process. What it is important is that we have a credible roadmap to reaching the 1.5 °target.  We will not get there in Glasgow but how do we further accelerate commitments between now and 2030 to keep this goal alive?  I believe a lot will depend on whether developed countries deliver on their commitment to provide $100 billion of climate finance annually to developing countries. Concluding the “Paris Rulebook” – a set of technical guidelines that allow governments to start fully implementing the agreement – would also be an important step forwards. Finally, I believe it is imperative that the Presidency can oversee a process that is perceived as legitimate, where everyone’s voice is heard, and where negotiations take place in atmosphere of goodwill and trust. This will enable parties to come back quickly in 2022 at the next COP to build on this momentum and waste no time in further closing the gap to 1.5°.

Professor Hayley WALKER is professor of international negotiation at IESEG where she teaches courses on interpersonal negotiation. Her research on the Danish and French Presidencies was published last year in International Studies Quarterly. Alongside her academic work, she is also a Principal at the non-profit thinktank and consultancy The Centre for Multilateral Negotiations. She is one of the editors of a new book Negotiating the Paris Agreement: The Insider Stories, that is published by Cambridge University Press (with a launch event scheduled during COP26 in Glasgow)

Corporate Social Responsibility (CSR)
Given an equal level of education, high school students from working-class backgrounds are half as likely to choose selective programs as those from privileged backgrounds, often due to a lack […]
See our News