Over a third of employees believe that ethical standards in their organization have improved following the Covid 19 pandemic (37%), and less than one in ten employees believe standards have worsened (8%), according to the latest research from the Institute of Business Ethics (IBE).
The 2021 IBE surveyed approximately 10,000 employees in 13 countries (including France) to find out more about their attitudes to and perceptions of ethics in their organization.

Good news.. and some bad news.. 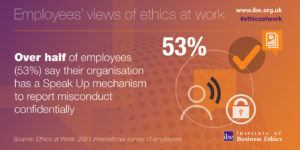 Furthermore, the IBE notes that a shocking two fifths of employees who spoke up about ethical misconduct say that they experienced retaliation as a result (43%). Almost half of employees (48%) in organizations with a comprehensive ethics program say that their line manager rewards employees who get good results, even if they use practices that are ethically questionable.

Insights into trends in France

IÉSEG, through its Center of Excellence for Organizational Responsibility (ICOR), has been one of the national partners in this IBE project helping to provide insights for developments in France. The results from the 2021 French survey have been published separately on this page .

“Compared to 2018, employees’ views of ethics at work in France have improved in many respects,” the IBE adds. “They are more likely to think that honesty is practiced in the workplace, they are less likely to be aware of misconduct and to feel pressured to compromise their organization’s standards of behavior.”

The study also finds that French and German employees are among the most likely to say that honesty is practiced always or frequently in their organization (89%), together with their Swiss colleagues (91%).

The percentage of employees who have felt pressured to compromise their organization’s standards of behaviour has decreased substantially in France compared to 2018 (9% vs 20%). This is the lowest level ever recorded in this country.

Out of the 13 countries surveyed, France is one of the four where less than 10% of employees report this type of pressure. The main source of pressure for French employees was due to following their boss’s orders (34%), followed by time pressure/unrealistic deadlines (28%).

However, the IBE highlights several issues that still need addressing in France. “Although more common than in the past, the provision of the elements of an ethics program is still less common than in other countries and employees have mixed views on their line manager’s commitment to ethics, as well as on the ability of their organization of engaging effectively with internal and external stakeholders.” 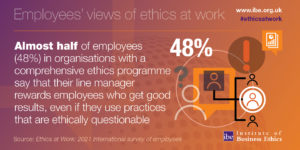 For example, it notes that only 58% say that their line manager explains the importance of honesty and ethics in the work they do.

Professor Simone DE COLLE, Professor of Business Ethics at IÉSEG, notes “Overall, it is very encouraging that less than one French employee in 10 say they’ve been pressured to compromise their organization’s standards of behavior. Perhaps the pandemic has helped some companies to rediscover the human side of business.”

“Nevertheless, it is concerning that French employees are among the most likely to experience some form of retaliation when they speak up. More than half (60%) said they had experienced some form of disadvantage or retaliation after raising concerns, the highest level among the 13 countries studied. The survey highlights that there is still fear among certain employees to raise their concerns.  It is therefore important that companies should make efforts to promote and open and inclusive culture, with channels for employees to speak up. Developing a good listening environment makes good sense for companies as it helps develop trust and engagement,” adds professor DE COLLE.

The full IBE report can be downloaded here.

The French survey results can be viewed here.

With the ‘Sustainability Certificates’ IÉSEG rewards its students’ commitment to sustainability

Corporate Social Responsibility (CSR)
The ‘Sustainability Certificates’ come from the ‘Responsible Leaders’ initiative, launched in 2018 by IÉSEG as part of its Vision to empower changemakers for a better society. The objective of this […]

Women in Business: in business, men or women, all of us can have extraordinary careers

Conferences
Women in Business is one the most recent associations created at IÉSEG. Founded in September 2021 by Morgane AGOSTINI and Jade SULMON (respectively in major Financial Transactions & Corporate Strategy […]

7th edition of the ICOR Award: a thesis on the ethics of artificial intelligence rewarded