On March 7, 2013, the opening ceremony of our China office took place in Shanghai. This event, prepared for several months, has been a great success.

Jean-Philippe Ammeux – IÉSEG Dean, Stephen Murdoch – Associate Dean International, Antonio Giangreco – Director of Post Graduates Programmes, and Barbara Slavich – Academic Director of the Master in Fashion Management, were present from France. Altogether, more than 70 guests attended the ceremony, counting among them representatives from our partner universities from Beijing, Tianjin, Wuhan, Nanjing and Shanghai. Some international or Chinese schools of excellence also participated: Wuhan Foreign Languages High School, Western International High School, Community High School and the French High School of Shanghai. Officials from the French Consulate of Shanghai, Campus France, the French Alliance, the French-Chinese Chamber of Commerce and the French Junior Chamber also participated to the event, as well as business partners such as Eurocopter, Safran and Oxylane. Let’s not forget IÉSEG students and alumni! 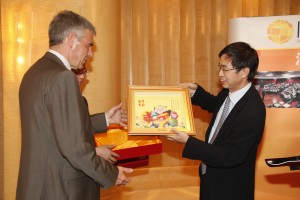 The guests also viewed two videos presenting IÉSEG campus in Lille and in Paris, as well as listened to the testimony of two Chinese students who have joined our school and our programs in France. The ribbon was cut by Jean-Philippe Ammeux, assisted by the four VIP guests of the evening. At the end, everybody has enjoyed the cocktail offered by IÉSEG and discussed future collaboration projects.

As a reminder, 1st IÉSEG India office opened in Feb 2009 in Mumbai. It shifted premises to Regus Business Centre from August 2012. This move has given more visibility amongst other neighboring Businesses within the centre and offers an absolute professional working environment. Located in the heart of the city, office is easily accessible from any location of premium South Mumbai. 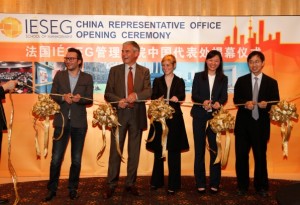