Francesc Coll, from Spain, graduated from IÉSEG’s MSc in International Business (MIB) in 2013. After a short period with L’Oréal and Air France he decided to stay in France to develop a commercial activity focusing on a raquet sport called Padel which is extremely popular in his home country of Spain. 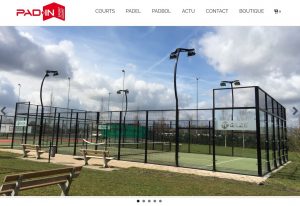 Padel is  played on an enclosed court which is much smaller than a tennis court. The balls and scoring is similar to tennis, but the main difference  is  that the court has walls/or a grill and the balls can be played off them.

In 2015, Francesc  set up a company, PAD-IN Sport Court,  which specializes in building Padel courts . It has already  been involved in the construction of 4 complexes which are based in and around Lille.

Following the progress of his first venture he has now set up a second company FRANCESC Sport Equipment (francesc.fr), which specializes in Padel equipment (rackets, balls, shoes, clothes, grips, …). It also seeks to promote the development of the Padel in France through for example the signing partnerships with clubs, sponsorship of players etc.

Francesc explains: “I decided to create my company after two years of reflexion. The MSc in International Business was the starting point of my project because I considered that a management background was mandatory after my first degree in Statistics. The courses at IÉSEG helped developed my sensitivity to international business opportunities and my knowledge of topics as negotiation, marketing or strategy.

I am passionate about both sports and economics, so when this opportunity (with padel) arose in France, this seemed like the perfect choice for me. Padel tenis is a relatively new sport and most of the industry is located in my home country, Spain. That was an extremely positive point for me as it helped me rapidly to establish and maintain a good relationship with all the stakeholders.

For me, the freedom and responsability of managing your own company has been worth some of the extra difficulties compared to a traditional job.”