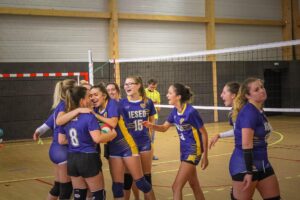 IÉSEG’s community life is very much driven by sports: the Paris-La Défense campus offers 12 different sports and the Lille campus 17. The Sports Offices of the two campuses offer all students a wide range of activities that allow them to better integrate into the School. The teams also represent the School during the numerous national and international competitions that mark the academic year.

This year, the IÉSEG teams have won many victories:

– At the 5 ball tournament organized on September 30, 2021 by Centrale Lille, the male handball, female soccer and rugby teams and the cheerleaders won 1st place.

– At the World InterUniversities Championships in Rome from November 10 to 14, 2021: male handball and female handball each took 2nd place, and female rugby took 4th place. The soccer team from Lille faced HEC in the group stage. In front of the entire IÉSEG delegation (Lille and Paris, i.e. more than 250 supporters), the Wolves beat HEC 5-1.

– At the Derby du Nord organized on March 19, 2022 by EDHEC: victory for basketball and male volleyball, 2nd place for male handball and female volleyball. As for the cheerleaders, they are vice-champions of the North!

– During the WESA on March 27th at the Kipstadium in Lille, which was organized by the Sports Office and Arts Office of the 2 IÉSEG campuses, IÉSEG Lille came out as the winner in Sports and the winner in Arts against the Parisians. For the first time, a CrossFit / street workout competition was held where athletes from both campuses competed against each other with a Parisian victory.

– During the French ESC Cup: the 3rd place goes to the men’s basketball team. Final 6 in Clairefontaine for the men’s soccer (first time since 2014).

Congratulations to all the participating teams! 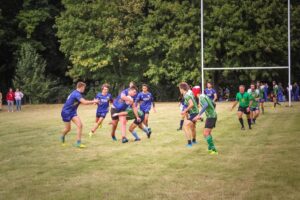 Our School
IÉSEG is pleased to announce the appointment of Caroline Roussel as Dean of the School. She takes over from Jean-Philippe Ammeux, who has led the institution since 1994. Her appointment […]

Corporate Social Responsibility (CSR)
Commitment is one of the core values of IÉSEG, which brings it to life on a daily basis through numerous initiatives. This year, the war in Ukraine has marked a […]
See our News