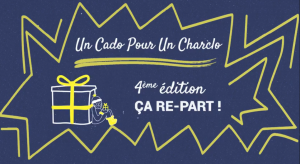 In 2015, Arthur Berthault, a Master’s student at IÉSEG, launched a Christmas challenge for Lille’s inhabitants: to collect a maximum of donations (winter clothing and accessories, chocolates, books, toys, make-up, etc.) in order to give them as Christmas gifts to the homeless and others living in precarious situations.

This initiative, which was created with the goal of “giving Christmas meaning again” and of “removing social labels”, has been successful from the beginning. Over 20,000 objects (clothing, food, etc.) were collected for the first edition, which made up over 3,000 gifts. Over 200 volunteers helped distribute these gifts on Christmas day.

Since then, the challenge has been extended to other cities in France, such as Lyon, Bordeaux and Nantes, and “Un Cado pour un Charclo x Lille” is now a student association at IÉSEG.

On December 1 2018, the fourth edition was officially launched at a new location in Lille to manage the collection and distribution of objects for the Christmas period, and in order to heighten public awareness throughout the year.

Arthur Berthault, the founder of the association, explained in December that the association hoped to raise as many donations as possible. However, the main objective is to create a “social bond”, as “the gifts are only a pretext to meet people.” The association hopes to organize different activities throughout the year (such as conferences and workshops) in order to ensure the project’s long-term future.

Arthur also hopes to convince other higher education establishments to develop branches in other cities in France.

*Presents for the homeless