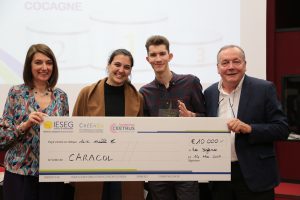 The Fondation Ceetrus pour l’Entrepreneur Social, in collaboration with IÉSEG School of Management, awarded the prizes for the CRÉENSO* national social entrepreneurship competition during an award ceremony on May 14th at Paris- La Défense.

This prize aims to reward the creators of social enterprises in two ways:

1. A year of support from an IÉSEG Master student: during the academic year, the students consult for one of the entrepreneurs nominated in the area of their Master specialization: marketing/communication, audit and control, human resources, management, etc. as required by the supported project. This is part of a graded module for the Grande Ecole Program at IÉSEG.

2. At the end of the year of support, the Fondation Ceetrus pour l’Entrepreneur Social awards €20,000 to the three projects selected by the jury (€10,000 for the first prize, and €5,000 for the second and third places).

Of the 60 or so applications received for this edition, 15 entrepreneurs benefitted throughout the year from the support of an IÉSEG student. At the end of this year of support, a jury made up of around 10 experts got together on Tuesday, May 14th in order to select the best three projects.

After the auditions, the deliberation was followed by the official award ceremony for the three CRÉENSO Prizes:

The first prize, €10,000, was awarded to Caracol (Paris), an association that develops solidary apartment shares between refugees and young professionals in vacant spaces.

The second prize, €5,000, was awarded to Vigne de Cocagne (Fabrègues, Montpellier), a social integration company that produces “authentic, solidary and cooperative wine, which is the result of sustainable agriculture.”

The third prize, €5,000, went to Le Recho (Paris), an association that creates a social bond between local and exile populations through cuisine.

Finally, the jury’s special prize (‘le prix coup de cœur’) went to Deligume (Anse), an online platform that puts local producers and artisans in contact with a clientele that is looking to eatgood local produce.