IÉSEG > News > Students > Women in Business: in business, men or women, all of us can have extraordinary careers
Back

Women in Business: in business, men or women, all of us can have extraordinary careers

Women in Business is one the most recent associations created at IÉSEG. Founded in September 2021 by Morgane AGOSTINI and Jade SULMON (respectively in major Financial Transactions & Corporate Strategy and in major Financial Management & Control as part of the Grande École program), Women in Business aims to promote the place of women in the workplace and in society, particularly through the promotion of outstanding career paths. 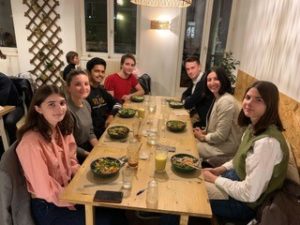 Why this association? ” In the future, I would like to work in the finance sector. It’s true that it’s a very masculine field. It was only when I attended a conference during which a woman presented her career in Finance that I realized that I felt this lack of female role model, although I hadn’t really realized it before. That’s when the idea came to me to create this association, which did not yet exist at IÉSEG“, explains Morgane AGOSTINI, who founded the association and is its co-president.

Léa BOIDIN (a student in the Bachelor cycle of IÉSEG’s Grande École program) joined the association in September, during the first recruitment campaign. “During my academic exchange in the United States, I was part of a similar association and I found it to be a very enriching experience, even if there, it only gathered female students… When I came back to France, I discovered with pleasure that the association had been created and I joined it right away.”

Women in Business wants to break codes and change mentalities in business Schools. Indeed, things are changing – slowly. “Later on, I would like to be a buyer and thus evolve in the professions of negotiation and business development. But there again, too often, men’s careers and testimonials are highlighted. The examples of women’s careers are too often linked to the marketing or luxury professions, it’s very caricatural. Women also succeed in other professions, such as those in which we want to evolve later on“, explains Léa BOIDIN. 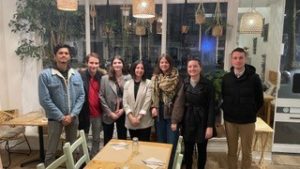 Based on the Lille and Paris – La Défense campuses, 25 students from the 1st year of Bachelor cycle to the 2nd year of Master cycle organize conferences and networking dinners monthly, each time with the objective of introducing the careers of inspired and inspiring women. Among the first guests we find big names such as Neveen AWAD (Managing Director and partner at BCG – Boston Consulting Group), Claire de Coincy (HE Manager world at Chloé), Lamia Mialet (president and co-founder of Cozy Air, president and co-founder of Cozy Air, one of the 100 economic leaders in the Hauts-de-France region),  Ratna SAHAY (Senior Advisor for Gender Equality at the IMF), Hélène SUPAU (former CEO of Sarenza and founder of two start-ups) and Claire GIRAUD and Géraldine JOUBAUD (respectively Customer Marketing Manager and Human Resources Manager at Coca-Cola European Partners). Beyond the discovery of their career paths, each speaker also addresses various themes, such as the place of women in business, how to succeed when you are a woman, entrepreneurship as a woman… 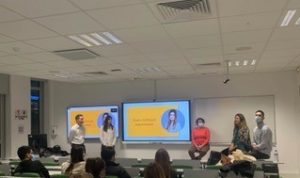 If Women in Business has already succeeded in finding its place in IÉSEG’s associative landscape, Morgane AGOSTINI is already projecting it into the future: “I hope that the association will continue to develop. For its first year, we have managed to attract speakers with very inspiring backgrounds and welcomed many participants to our events. Bringing personalities from the IMF, BCG, Coca-Cola to IÉSEG was a great success, and I hope the next team will succeed in doing even better! “

This success is fully in line with IÉSEG’s Vision 2025 and its values of Achievement, Responsibility and Engagement.

“Women in Business acts in a concern for equality in business, we wish to bring everyone with us, men and women. We want to show that in our society, there is room for everyone and that the success of women should not be a source of conflict, but rather a source of exchange,” says Morgane AGOSTINI. And to conclude: “Women in Business is not an association of women for women. It is an association that aims to show that everyone, in business but not only, can succeed and have magnificent, inspiring and impactful careers. It is not because you are a woman that you cannot succeed, and it is this fundamental message that we wish to bring to everyone, female and male students, in order to change mentalities and break the famous “glass ceiling” that women managers too often encounter in companies.”

IÉSEG organizes the 3rd edition of its Intercultural Engagement Week

Conferences
In order to expand its activities to promote learning, teaching and research around the issues of interculturality, diversity and inclusion, IÉSEG is organizing the 3rd edition of the Intercultural Commitment […]

A look back at the Corporate Summer Workshop 2021!

Conferences
The 5th edition of the IÉSEG Corporate Summer Workshop Program took place on June 11th and gathered more than 200 people thanks to its hybrid format. The professionals that took […]

Conferences
IÉSEG School of Management regularly sets up meetings between its students and its partners, giving the students the opportunity to mingle with key individuals who inspire them to become future […]
See our News